Autumn Voices, in partnership with Gatehouse of Fleet’s The Bakehouse Community Arts, is delighted to announce the second day of poetry and publishing workshops offered as part of our ‘Watering Grassroots’ live event series, funded by DG Unlimited. These will take place on Saturday 26th March at The Mill on the Fleet. 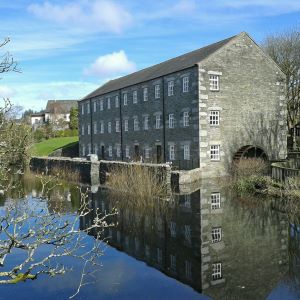 It’s the Stewarty’s turn in March, and we’re delighted to offer a ‘Start Writing Poetry’ workshop from 10.30am to 12pm with well-known local poet, short story writer and Southlight editor, John Burns. Sheila Wakefield, founder and editor of Red Squirrel and Postbox Press, will run a ‘How To Get Published’ workshop from 1.30pm to 3pm. Both workshops are free of charge and available only to people aged 60 and over in line with Autumn Voices’ community focus. Numbers will be limited to 12 people in attendance each at the poetry workshop and the ‘How To Get Published’ workshop.

Access via Zoom at all events will be free and available for limited numbers who can’t attend in person. The ‘Start Writing Poetry’ workshop is aimed primarily at complete beginners or those very new to poetry. For more information, please email admin@autumnvoices.co.uk

These workshops run by Autumn Voices and its partners are part of a dynamic, varied nine-month programme of small-scale arts and cultural events which has been developed to bring Dumfries & Galloway Together Again. The initiative will see grassroots events and activities staged in towns and villages all across one of Scotland’s most rural regions – helping promote social and economic recovery in an area that has been deeply affected by the pandemic. The Together Again season is organised by the independent arts organisation DG Unlimited and sees £42,403 of funding from D&G Council and its own resources invested in nearly two dozen projects until April 2022.

Stephen Lacey, Chair of DG Unlimited, said: “Together Again is all about bringing communities safely together again through the arts and creativity as we emerge from the pandemic. Together Again champions the vital role that creativity and culture plays in our lives, how it connects people, contributes to the region’s economy, and promotes community cohesion and individual wellbeing.”

The Mill on the Fleet was built in 1788 as a cotton spinning mill and was restored by D&G Council in the 1980s as a visitor and exhibition centre. Its exhibition floor houses a display focusing on the history and heritage of Gatehouse and the Fleet Valley. The building also houses a café, a bookshop, regional arts and crafts pop-ups and a programme of events. You can find more information here.

Event produced by The Bakehouse and Autumn Voices

The Bakehouse in Gatehouse of Fleet is a community arts hub and charity dedicated to poetry and the spoken word, as well as skills connected with writing in Dumfries and Galloway. Run by poet Chrys Salt and her husband Richard MacFarlane, alongside a talented team of skilled supporters, The Bakehouse offers a lively programme or year-round poetry events, as well as being the hub of BIG LIT, the Stewarty’s 4-day festival of all things literary, which recently celebrated its 10th anniversary.

Autumn Voices is an online organisation which promotes and supports creativity among older people through blogs, articles, competitions, and the showcasing of creative work, including a national poetry competition with prizes, held annually throughout October, and linked to National Poetry Day themes.

The people at the event:

Dr John Burns is a poet and short story writer who teaches English and Tai Chi. He is the author of Celebration of the Light: Zen in the Novels of Neil Gunn, and Series ofDreams: The Vision Songs of Bob Dylan. Some of his poetry in Scots appears in Chuckies for the Cairn, an anthology of writers from Dumfries and Galloway. He has run writing workshops in schools and in the wider community. John was one of the founding editors of Cencrastus and is now part of the Southlight editorial team.

Sheila Wakefield is founder and publisher of Red Squirrel Press and Postbox Press. Both are self-sustaining independent presses founded in 2006 and based in southern Scotland. Sheila has published over 250 titles to date including poetry pamphlets and full collections designed and typeset by poet Gerry Cambridge, as well as novels, short story pamphlets and collections.

Chrys Salt, MBE is a multi-award-winning and widely published poet and performer. She has written in every genre except the novel, but she is primarily a poet with roots deeply planted in the theatre. She has written four full poetry and five pamphlet collections and performed UK wide, in the USA, Canada, France, Germany, Finland, India and Australia. Her work has been broadcast on both Radio 3 and 4, translated into several languages and appeared in magazines, anthologies and journals worldwide. She is a trained performer and worked as a successful actress for some years alongside her writing career.Chrys is Artistic Director of The Bakehouse, a flourishing community arts venue, and BIG LIT: The Stewartry Book Festival an annual four day literature festival in Galloway.