Andrew Wilson is 67 and has run Beltie Books & Café for the last eight years. Beltie Books is in Wigtown, and it was opened as a new addition to Scotland’s National Book town. He moved with his partner Nick ‘back’ to Galloway in 2010. Dumfries & Galloway is Andrew’s home region, while his partner Nick is from New Zealand and works as an NHS Psychiatrist. They’ve been together for 30 years, and Nick is Andrew’s success story!

Andrew feels he should have done more with the educational and social advantages he has enjoyed. He has two degrees from Edinburgh University, involving an awful lot of Scottish History. He did intend to become a Church of Scotland minister – which would have no doubt hit the rocks, as he is gay, and was never cut out to be a pillar of society.

Running his own bookshop and cafe is ideal; he likes cooking for and entertaining people, and enjoys jabbering about Scotland, history, Galloway, books and food. He would freely admit to being a total misfit and not one to tolerate the conventional and narrow minded of this world.

I avoided learning Gaelic earlier because it seemed too much of a cliche for such a fervent Scot as I, especially when all my people were Lowlanders. I finally succumbed to it when we lived in Glasgow from 1992 until 1996. I had known it was nothing like English and was one of the Celtic languages of pre-Saxon Britain, but I never expected to become such a devotee. I cannot emphasise enough that to learn the rules that apply to Gaelic, you do not get a ‘special’ ability to comprehend it just by being Scottish, and it is nothing at all like the English language, even to read.

There is however, so much in Scottish speech that comes from Gaelic. The way we ask, ‘where do you stay’, for example, actually means ‘where do you live’ and comes from the Gaelic fuireach, meaning ‘stay’. The way Glaswegians pronounce film as ‘fillum’ is pure Gaelic – fiolm. Like gorm, the word for blue, it’s pronounced with two syllables as though there is a vowel between the l or r and the m.

Asking someone if they will ‘take’ some tea, is the Gaelic way of saying it. Gaelic has two verbs for ‘take’: the gentle form, ‘take the tea’ = gabhail; the stronger form, ‘take the money’ = toirt. You ‘take/ gabhail’ a song when you sing, and interestingly, you ‘lift a picture’ when you take a photograph in Gaelic: togail dealbh. Gaelic is far more subtle than English. There are two different verbs for ‘miss’. Lonndrainn is used for missing a place or person, and call is for missing the bus. It has a choice of verbs for the word ‘die’. The ones I think are most descriptive are siubhail or ‘to travel’ and caochladh or ‘to change form’.

Gaelic is just so much more expressive. It has poetic words like mactalla for echo – literally son of the hall. Eadar-theangachadh means ‘to translate’, literally between tongues. My favourite word is oidhche-cailleach, meaning owl, and literally translated to ‘old woman of the night’.

I remember being skeptical when my correspondence course in 2000 stated: ‘there are many prepositional pronouns; you must learn them and be able to decline them.’ It turned out to be 100% correct. Gaelic has no verb meaning ‘to have’, so everything is at you, on you, in you, from you, by you, with you, under you, out of you, to you, off you etc. And of course, they therefore have a me, he/it, she, us, you, you plural, and they forms. What becomes fascinating is which verb takes which prepositional pronoun; this may sound rather ‘anorak’ but you really need to latch on to this.

Then there are the narrow vowels i and e and the broad vowels a, o and u. The narrow ones radically change the pronunciation of d, t, and s. In fact, Gaelic only uses 18 of the 26 standard alphabet letters we use in English (there’s no j, k, q, v, w, x, y or z) but Gaelic gets more sounds out of the 18 that it does use! It is just a weird fact when you read this here, but when you learn the language, you see how there are 3 ways of saying l or r, and how all the consonants change when they are accompanied by the letter h. This is the great principle of ‘lenition’ – simply put, softening the sound; this is the entire raison d’etre of the letter h and how it is subtly used to show the gender of a noun, what, if any, person the preposition is in, or what tense the verb is in.

I realise this all sounds like gobbledygook, but when you get to grips with Gaelic it really becomes fascinating and has the spin-off effect of enhancing your understanding of your own language. For example, what the different tenses of a verb are called and how there can be different cases for a noun – such as vocative, dative or genitive, and what those words actually mean. It seems crazy that in Gaelic the same noun is spelt different ways depending on what case it is in, but believe me, it all becomes fascinating!

The best must be the verb ‘to be’, somewhat crucial, but it has two forms in Gaelic. One for describing, e.g. ‘I am tired’, ‘are you cold?’ But, in a different form if you are being definite, like where you are from, what you do, or what you REALLY think. (No need to shout, just use the definite form of the verb to be!) Once you get the hang of this, you will be chopping and changing from describing to defining and back again, and it is so much better than English! Gaels are great ones for sticking sa on the end of pronouns or repeating the same thing with fèin/fhèin in it (myself/ yourself). Sadly, when people mock Gaels, they mimic that, especially the phrase ‘at all at all’, because that is what you say in Gaelic –`idir, ìdir’ just like our Irish cousins. Scots Gaelic, Irish Gaelic and Manx are all descended from Old Irish.

The spectrum of colours is a bit different in Gaelic, especially when it comes to blue/green, grey in various shades, or red/ brown. As one wise person said to me: ‘learning Gaelic is like seeing the landscape through the eyes of an older people who were here before we were’. It is exactly that.  The Gaels named so many features and places in our landscape, and sadly we have not a clue what that name means, because we have ceased to speak the language of the people who first named them. This is especially true in Galloway.

It really is such a problematic thing to say, ‘oh why do they not have signs in Polish or Punjabi, there are far more speaker of them than Gaelic’. Perhaps, but Gaelic is the language of the people who named the country we live in, and became our first kings and queens: the Scots. Their language, our country’s language, is unique to this place – nowhere else, and if it goes it goes off the map of the world altogether. It only takes a bit of effort to acknowledge that and show some respect.

The venom that comes out, when Gaelic gets any recognition, is all too evident from people who should know better. When you remember the way Gaels were made to feel ashamed of their language and traditions, driven out of their homelands, and their children belted into speaking English, it can make you very angry. And it does make me angry. The worst offenders, I’m sad to say, were often Lowland Scots, or anyone on the side of the establishment, or ‘progress’. I guess that is what makes Gaelic so intoxicating to anyone who is against the system. The language represents values that are at odds with modern society – music, song, dance, storytelling, bards and poetry are integral to and inescapably part of Gaelic, and my goodness are those things not far far more wholesome than consumer driven economic growth at all costs? I know learning Gaelic has led me to me finding out I have a flair for poetry, for understanding it, even writing it. It has shown me I have a head full of Scottish reels and jigs, and now when I learn the music the tune is already there, even though my fingers do not always co-operate. Gaelic has taught me to join in, to share a wee story, a memory, a bit of history with listeners – and not be embarrassed.

I think one of the great ills of our life today is being out for yourself, to make money, to get on, success is your God. Because Gaelic is the language of an indigenous people, those concepts are quite alien; Gaelic is about the common good, being a contributor, being useful. And of course, loving and belonging to a place, not the other way round. I think it roots you and gives you an identity. Well, that’s something I feel strongly, and a big part of why I love Gaelic.

In Gaelic they do not ask where you are from, they actually ask ‘who are your people?’ The Gaelic for aboriginal is tùsanach, and if you spoke Gaelic from childhood, it is bho thùs: the same root. It’s not a question designed to pinpoint ethnicity, it’s about sharing values, recognizing what’s important, and belonging to a community, a place, and its story.

I was not born a Gael, but I feel thoroughly included.

You can find Andrew online at: 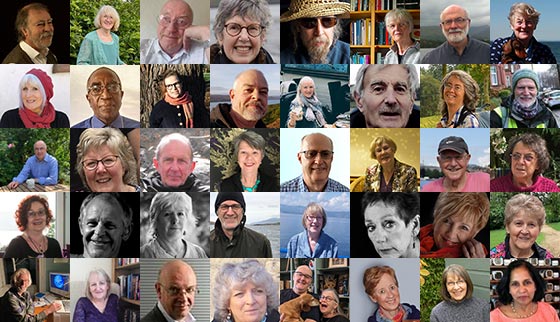 We need your help!

Our Crowdfunder is now live, please take a moment to read about our campaign to keep Autumn Voices online.