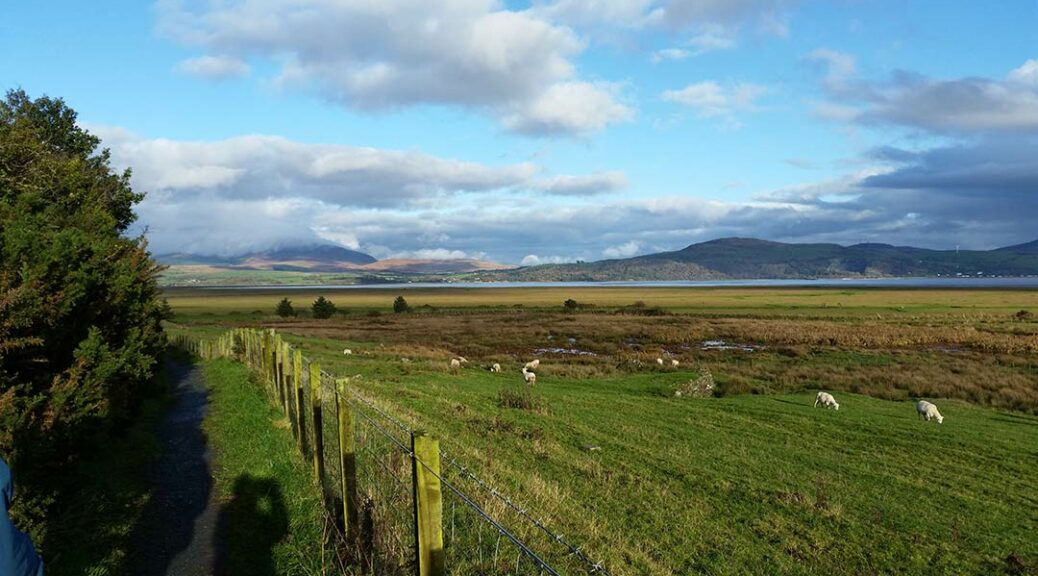 Neither of my parents were keen on walking, but I had an older sister who took me on holiday to the Lake District at the age of ten and then, when I was twelve, she and her then fiancé took me youth hostelling and we climbed Helvellyn. That was the start of my love for walking, and hillwalking in particular.

When we were students, and later when we were working and had a family, my husband Les and I tried to get out walking at least once at weekends, and holidays always involved walking. The children were happy to go along with that routine – at least until their mid-teens.

We had two walking holidays in Wales – backpacking and youth hostelling. The second one was when our daughter was fourteen and our son twelve. Climbing Cader Idris, the others were getting further ahead; I could feel myself getting hotter and hotter, my heart was thumping and I felt as though I was going to collapse. I was in my forties and decidedly not as fit as I should have been.

In 1995, Les reacted badly to some medication and that resulted in him having to learn to live with fibromyalgia. In those days we lived in Holmfirth at the top of a one in four (rather steep) hill, but only a short walk from the centre. There were days when there was no way he could walk down to the post office, let alone get back up again.

One day we set off for a short walk from the house on footpaths. Halfway round Les stopped and had to sit down and we didn’t know how he was going to manage the last half mile or so home. Over the years, he has learned how to cope with the chronic pain and chronic fatigue. We discovered that it’s important for him to have regular exercise to keep fit and in fact walking can leave him feeling he has more energy. He needs to go for a walk every day if at all possible.

However, it was only when we moved up to Dumfries and Galloway in 2002 that we were able to spend much more time walking and I discovered that I still wasn’t really fit. We had a regular ‘round the block’ walk of about four and a half miles from our house at Craig crossroads, two miles from Whithorn along the B7021 to Ravenstone and back past The Swallow Theatre to Craig. Gradually we both built up stamina and fitness.

Walking on beaches, in woodland and on moorland is a joy. Being out in the fresh air, surrounded by the natural world lifts the spirits. Not only does physical health improve but also mental and spiritual wellbeing.

We both enjoy taking photographs and the natural world has inspired me to write a number of poems. Before Covid, we produced a book From the Mountains to the Sea consisting of my poems and Les’s photographs – all taken in this beautiful corner of D&G. Profits from book sales are going to the charity Versus Arthritis, earmarked for research into fibromyalgia.

Since moving to Wigtown in 2015, we’ve climbed The Merrick and Cairnsmore again, walked round Loch Trool a number of times and we regularly enjoy a number of walks varying from three to six miles or so.

However, we have to pick the right day to tackle a more strenuous walk as there are times when just a five-minute walk down into Wigtown means we need to call in for a coffee somewhere before walking back up the hill home. Fibromyalgia never goes away and there are some days it can’t be ignored. We make the most of the good days but have learnt than we can’t always plan what to do when.

We celebrated our golden wedding anniversary in 2018 by taking our family on a walk up the Fell of Barhullion – not the most challenging of hills, but one with a spectacular 360-degree panoramic view. We wanted to prove that although we’re now in our seventies, we aren’t quite decrepit. When our daughter and daughter-in-law realised that I was finding the walk easier than them, I was able to explain that I am fitter now than when I was in my forties – reassuring them that there’s time for them to improve their fitness too! Next year, Les hopes all our family will celebrate his 80th birthday on the top of Cairnsmore – we hope that we’ll all make it. Watch this space …