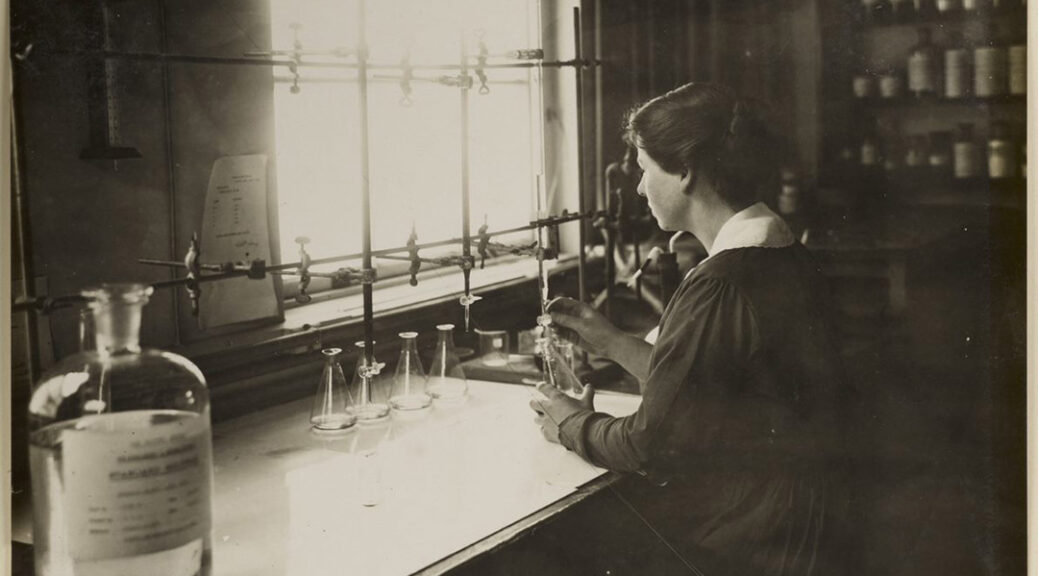 A graduate of Hull University, Adele taught English in secondary schools before moving to work with adults whose health was impacted by poor basic skills. This led to a career as an independent consultant working locally and nationally in the field of health improvement – latterly on the National Healthy Schools Programme. As well as carrying out health needs analyses in local communities, Adele helped to develop and deliver training for a range of communities including health professionals and schools. She lives in rural Norfolk in a small but busy village and is currently juggling the demands of a large garden with the desire to get on with more family history research.

How is it possible to love someone so much and yet to know so little about them? So asks Fredrik Backman in his book My Grandmother Sends her Regards and Apologises.

It’s a question that has popped into my head many times over the last few months – particularly since joining the Devils’ Porridge research project. Flora Richardson, my paternal grandmother, was an important part of my childhood – even though she lived in Eastriggs, Scotland and my family had moved back to South Yorkshire from Eastriggs when I was four. She would arrive on the train in early December and stay until Easter. We visited her as a family each year, and by the age of ten I was put on the train in Sheffield (in the care of the Guard apparently) and Flora would meet me in Annan. My stays with her were wonderful and the Commonwealth-inspired street names of Eastriggs intrigued me. I had no idea why this small village near the Scottish Border had streets named after places on the other side of the world, but I was very happy to be there.

I knew Flora had been in service when she was young. She had the habit of ironing the newspapers (to make them more pleasant to read) and of ‘powdering’ my father’s clean socks before putting them away, practices she said that came from her service days. Beyond that I knew little of her past. She died in December 1970, and I missed her terribly. Family history featured little in my thoughts for some years until a random conversation with my father, just before he died, prompted me to rough out a very minimal family tree with his help. Suddenly that day, the words ‘Munitions Worker’ were attached to Flora for the very first time. Fast forward twenty years or so to a random stop in Eastriggs where I chanced upon The Devil’s Porridge Museum in its very early days. I began to realise that Flora had been part of something very special – HMF Gretna – ‘the greatest munitions factory on earth.’

So, here we are in 2021, another 10 years on. I am now 66 years old and part of the research project to find out more about the many unknown workers at HMF Gretna – of whom Flora was one. Before I die – although hopefully not for a little while yet – it suddenly seems so very important to understand my family history and how it has shaped me. I am not ashamed to say that I can now bore for Britain about family history – despite being a complete novice. I have bonded with people I had not really thought that much of before because of this shared passion. I am loving learning new skills and finding nuggets of information from sources like The British Newspaper Archive and Scotland’s People. I had done some research over the years, but being a part of this project has sharpened my focus and made me realise that Flora’s story is also that of thousands of young women who left lives and families behind to answer the call for munitions workers. This is not just about my family history; it is about how the Great War changed the lives of women forever.

So, to Flora. She was a Dalbeattie girl – the second of ten children, born in October 1889. Her father was a Quarry Worker and Dry Stone Dyker. The 1911 Census shows the family living in Dalbeattie and Flora (aged 22) and her mother working in the local glove factory. At some point after that she went into service at Castlemilk House near Lockerbie owned by the Jardine family. There she met my grandfather John Jackson Little, a groom, and son of a local Blacksmith. At some point she left Castlemilk to work at HMF Gretna (possibly when the house became a hospital during WW1). I have very few possessions of hers, but I do have a studio photo of Flora and another young woman in their factory outfits. I also have her autograph book which contains entries from those years. Some of these are from people who worked in the Central Lab at HMF Gretna and so I wonder if somehow the work she did was linked to the Lab. The personal nature of the entries and the exquisite detail in the drawings and poems leads me to think these people were well known to Flora rather than passing acquaintances. Basic research has shown some of these contributions to be from an Australian Chemist and other scientists who have been added to the Devil’s Porridge database.

Flora married in November 1917 whilst at the factory but returned to Dalbeattie after her marriage where her three sons were born. Something about Eastriggs made her return some years later and she lived there for the rest of her days.

I have much more research to do but I suspect I will never be able to create a detailed story in the way that is possible when letters and photos are carefully passed down through generations. She would have had an independence she could not have dreamed of when helping her mother care for her eight younger siblings or when in service. Her love of cinema was most probably nourished in the state-sponsored cinemas of Gretna and Eastriggs when for the first time she would have been able to watch films in female company. Her love of being smartly turned out may well have been honed by being surrounded by other independent young working women who took their role models from the big screen and had income to spare. Her working life would have been hard and the days long, but she had opportunities that could not have been dreamed of in rural southwest Scotland in the early years of the twentieth century.

I may not yet know my beloved Flora’s full life story, but I do know she was part of something remarkable. I also know that her time at HMF Gretna may have been relatively brief but that it shaped her and influenced the life I in turn have been able to lead.

Throughout November we’re inviting our beloved Autumn Voices members to submit any short piece of writing about War & Remembrance. It should be no longer than 300 words and can take any form you wish. At the end of November, we’ll pick our favourite and the author will receive a copy of Codebreaking Sisters by Patricia and Jean Owtram. The publisher, Mirror Books has very kindly given us a copy to offer as a prize.