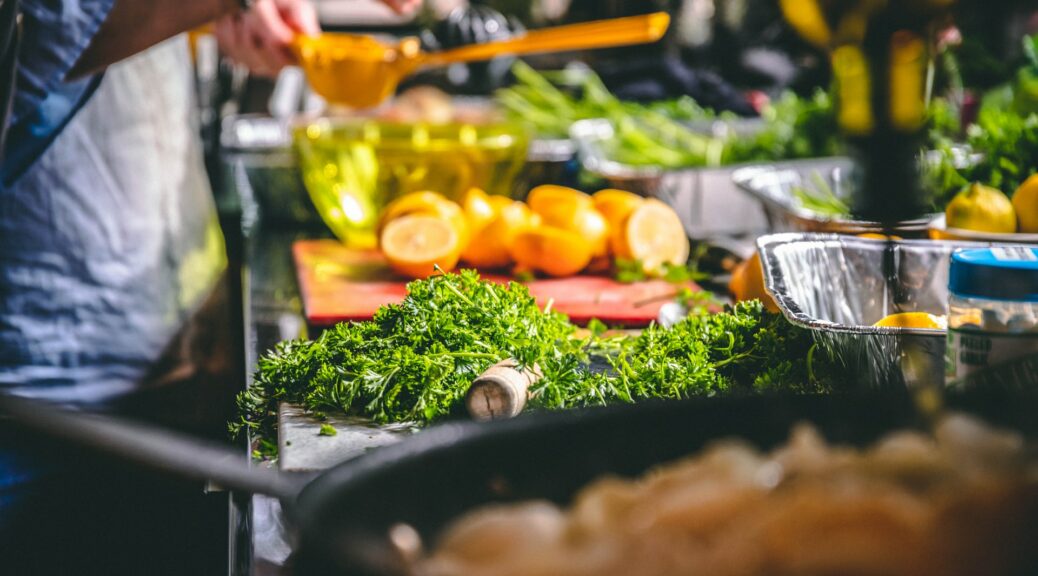 Alasdair (61) was born in London to a Scottish mum and an Anglo-Irish dad and came back to Scotland to live with his wife and two young sons in 1999. Since then, he’s combined working as a professional musician with jobs in catering. He was one half of healthy cookery demonstration duo ‘Two Fat Gents’ which toured the Highlands for the Healthways organisation and worked for many years as a chef for the National Trust For Scotland. Since accepting redundancy during the pandemic, he’s been concentrating on playing the piano and running the family’s tourism business in the Highlands.

Cooking for one…  or two.

I’ve always been the family cook. It’s less unusual these days for dad to be the one expected to put something on the table come the end of the day – and that’s a good thing, but, back when our boys were small, it was definitely still considered odd. When their little friends came round to tea, however well behaved they were, there was much consternation upon discovering they’d strayed into a house where the dad made the food.

Perhaps our domestic arrangements were so quirky I didn’t really notice time overtake us and the boys appear at the dinner table less and less. I feel foolish to admit it, but it was only when one of my own friends cheerfully referred to me as an ‘empty-nester’ that the full ramifications of our change in status impinged. Most of the time just the two of us sit down to dinner now. And only gradually did the freedom this offered dawn on me.

For years I shopped and cooked for four and accommodated three other people’s tastes when I did so. I accepted anything exotic might be regarded with suspicion and any olives or anchovies plucked out and aimed disdainfully over the table at dad’s plate. For years we ate at ‘dinnertime’. Now we can eat whenever the pair of us feel hungry.  If we feel hungry.

Food is absolutely about sharing, but sharing isn’t just about being generous with what you’ve made. Sharing can also be about ceding space to one another. Now that the amount of food being prepared is not in the industrial quantities required to refuel two growing lads, the kitchen is a less frenetic place under dad’s dominion. My wife feels able to impress herself upon it more. And to express herself more. She’s developed a talent for preserves, jams, pickles and chutneys – not things I’d ever bother to make.

And now there is space for our tastes to diverge too. With the need to feed now less urgent, both of us can be more creative in what either of us cook. Sometimes we each make our own, quite different dinner. I started cooking for myself at university in the south of France, so I tend to do French and Italian food, with a bit of Arab. My wife is no particular lover of pasta and favours more traditional fare – chunky and wholesome. She grows fruit, vegetables and herbs on the croft we live on so she’s methodical about pureeing, preserving and freezing to make the most of seasonal gluts.

All this sounds positive. And it is, for us. But it’s equally possible that the freedom to cater just for ourselves might result in something less positive: not bothering. Some of us might wonder: is it worth it? I’m never going to eat all of that by myself, half of it’ll just be wasted.  And the obvious consequence is to resort to ready meals – which supermarkets are pleased to refer to as meal solutions – as if feeding ourselves were a problem. Take-outs are fine as a treat but routinely feeding yourself that way is expensive and although the range and quality has improved, ready meals still tend to be heavy in fat, salt and carbohydrate – the Scottish variant especially so. That’s less of a problem if you’re burning it off labouring outdoors everyday…but at our age?

It really doesn’t have to be that way. We don’t have to be so passive. Not everyone may subscribe to my attitude that food is one of life’s great sensual delights – but all the more so if you sit down with your wife to eat food she’s grown on your own land. However, feeding yourself can be the opportunity to learn new skills, for self-expression, and to challenge yourself with some spontaneous creativity. The traditional rural French way of doing things is to see what’s good at the market that morning and construct dinner from that. Nothing planned, no preconceptions, all delightfully improvised. Ingredient-led is the proper term. If you’re just pleasing yourself, you can do much the same from a combination of what’s in the fridge and what tins and packets you find skulking in the cupboard. Experiment; combine; get creative.

And the waste thing? Well, listen to your body. Don’t overeat just because you’ve made what was probably an arbitrary quantity of something. There’s no obligation to down it all.  Take your time over dinner. It takes twenty minutes for your stomach to register what you’ve already eaten.  If there’s loads left, there’s always the freezer, or there’s always cling film. Put the excess in the fridge for lunch tomorrow.

Also, think big and batch cook. Award yourself a couple of hours in the warmth of the kitchen making a big vat of soup or chilli or ragu or cassoulet, then freeze it in portions.

Feeding ourselves is something we all do every day. We have to. But that needn’t reduce it to grim routine, like cleaning our teeth. We shouldn’t begrudge the time or the effort required to do it properly. (Although as in any endeavour, the simplest food is invariably the best.)

So much creativity takes place in the imagination, where your mind works the dough.  Cooking, on the other hand, is the kind of creativity that demands you get your hands dirty.  And that offers an entirely different sort of gratification.

This is a great vegan soup for any time of year: cheap, dead easy to make and really nutritious! These quantities yield about 8 bowls, so you can halve or quarter the quantities, or make the full amount and keep some for another time. It keeps in the fridge (covered) for up to a week and freezes well for up to 6 months.

Add the olive oil to a big stockpot and heat to medium. Add the chopped onion and cook on medium heat for 3-5 minutes until translucent. Then add the garlic and celery and cook for another 2 minutes before stirring in the chopped sweet potato and the lentils. Tip in the 2 cans of tomatoes together with all their juice and top up with the vegetable stock (you might not need it all immediately – see how you go and add a bit more if it seems to reduce too much during cooking). Add herbs and seasonings and bring to the boil, stirring, then lower heat to a simmer and cook for about 40 minutes. Right at the end, stir in the chopped kale and the red wine vinegar and cook for about 5 minutes until the kale has all wilted.

I love dishes that have a story behind them. The porters at Les Halles market in Paris came up with their hot beefy onion broth, fortified it with a dash of brandy and added slices of baguette with molten Gruyère to keep them going in the early hours. And at the opposite end of the day, the ladies of the Neapolitan night pepped up their flagging spirits with Pasta alla Puttanesca. Heaven knows how much truth there is in any of that, but it adds another kind of flavour. Not that Puttanesca needs it. The beauty of this is fourfold: it’s quick and easy, it’s healthy (it involves minimal oil and the anchovies are rich in Vitamins A and D and Omega3 fatty acids), it’s full of flavour, and it’s a great store cupboard meal. None of its ingredients are going to go off any time soon.

This isn’t a harassed recipe, but it is relatively quick, so bring a pan of water to the boil before you start and leave it bubbling away. Meanwhile, tip the entire contents of the anchovy tin, oil and all, into a non-stick frying pan on medium to high heat. That way, you shouldn’t need to add any more oil. The anchovies will soon begin to disintegrate if you prod them about a bit. Once they do, after a minute or so, chuck in your garlic and chilli flakes and fry them off for another minute max. Then slosh in the tin of tomatoes, the olives and the capers.  Reduce the temperature to low and give the sauce a good stir.

While that’s reducing down, put your spaghetti on to boil. A bit of pasta lore: never be tempted to put a drop of oil in the cooking water. It may stop the pasta sticking to itself but it will also prevent the sauce from adhering to it, which is what you want. To prevent pasta sticking, gently move it about in the water as it cooks with a draining spoon or some tongs. Drain as soon as it’s al dente. Leave it any longer and again, it will get claggy and you’ll end up with great ropes of spaghetti. Drain it thoroughly and leave to stand for a minute or so – otherwise you’ll end up diluting your sauce with any residual cooking water. Then do not put the pasta on a plate and plonk the sauce on top. Combine the drained pasta in the frying pan with the sauce, turning it over until it’s completely dressed in the sauce. Serve with Parmesan freshly grated over it.

If Alasdair’s recipes and experience have inspired you, why not try your hand at writing about how you eat well as part of our monthly CLANGERS project where Autumn Voices members share their own experiences. Read more about CLANGERS.