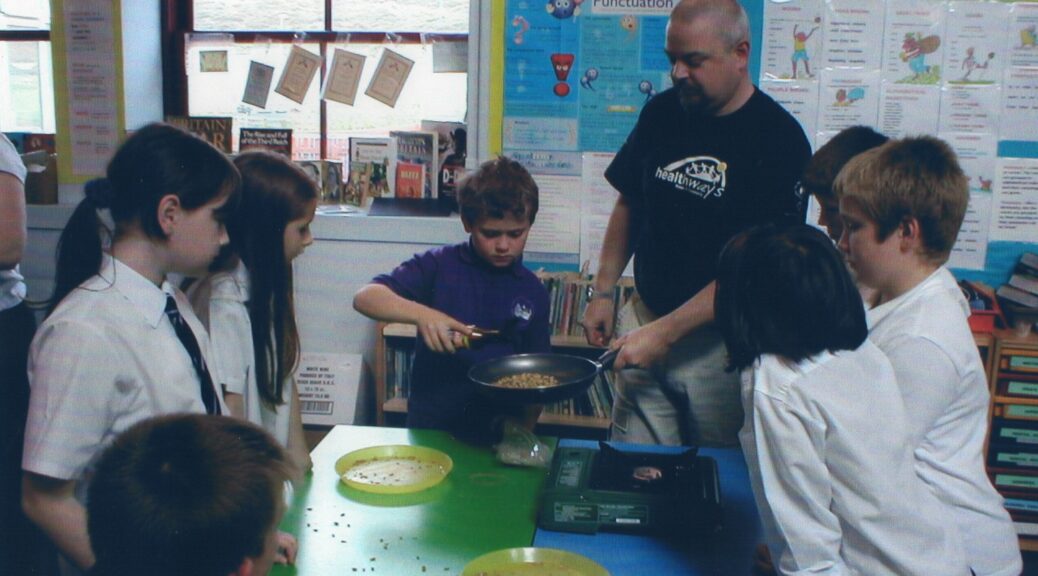 Food is fuel, there’s no getting away from that. But beyond that, one of the most compelling aspects of feeding ourselves is when it brings us together.

Some years ago, now, Highland Council recruited me and a colleague to do cookery demos as part of their ‘Healthways’ initiative. The idea was to overcome traditional, outdated notions of cooking in general, and healthy cookery in particular, with a certain amount of beardy, blokey bonhomie. So, me and my friend Stuart became Two Fat Gents!

We did cookery demos in schools, leisure centres, old people’s homes and at festivals. We did fish festivals, biking festivals, diabetic awareness weeks, silver surfer days and heaven knows what else. We also did whole courses of weekly evening classes in various high school cookery departments, specifically tailored to people referred by their doctors as needing help with their diet. So much of this was simply imparting confidence, demystifying the business of making your own dinner as opposed to living on take-outs. It helped a lot that we were two blokes who were very much of the ‘and then you chuck some of this in and give it a stir’ school of cookery rather than sternly precise domestic science goddesses. We made mistakes and laughed at each other for making them. And our audiences laughed too. That in itself was very important because anyone embarking on something new needs to feel they’ve got permission to get it wrong.

One of the main causes of depression is the feeling that we lack control over our own lives. As someone who’s always cooked, it astonished me to see how little faith some people had in their ability to make themselves dinner. Some of the people referred to us for our evening classes needed help eating more healthily or with specific dietary problems. Some of the more vulnerable ones had made themselves ill by limiting their nutritional intake to pretty much the same take-out every day. That self-limiting was sometimes upsetting to see, but it was a great feeling to share how simple it could be overcome it with a few uncomplicated recipes, and to watch the first stirrings of a new self-confidence in individuals who found they could make food for themselves that they actually wanted to eat.

Yes, we kept the healthy diet proselytising to a minimum and we cut a few corners so that it wasn’t all brown rice. We showed them how to make fruit smoothies, fruit-heavy salads, and lots of omega3 fish dishes. But here’s a couple of the simpler, cheaper and perhaps stranger things we used to show people how to make:

Sunflower seeds are high in protein, dietary fibre, vitamin B and E and also unsaturated fats which contribute to lower blood cholesterol. Pumpkin seeds similarly are a good source of unsaturated fats and vitamin E and are particularly helpful in managing type II diabetes. Soy sauce is rich in antioxidants and helpful in preventing cardiovascular diseases.

Chuck a mixture of the two seeds into a non-stick pan on medium heat and dry fry. As the pan heats up, keep moving the seeds around and after a minute or two they’ll start to brown and the natural oils in them will be released. Once the seeds are evenly browned, take them off the heat and, using the residual heat in the pan, shake a few drops of soy sauce over them (don’t overdo it), turning them over to get an even coating. Finally, munch away – knowing you’re eating something vastly healthier than a bag of crisps!

This is one of the recipes we demonstrated that particularly sticks in my mind. It’s remarkable for various reasons. First, because most of us wouldn’t think to make soup out of oatmeal – and indeed, get the proportions wrong and you end up with something resembling concrete. But also, because it demonstrates how onions have a natural sweetness which can come as a surprise! One of the good things about this is it’s filling (and healthy) because the oats are slow-release carbs which is exactly what you want to keep you feeling full, so you’re not tempted to start picking at unsuitable things during the day. Also, because they’re slow-release, your system works on them gradually rather than getting a huge sugar rush in one go.

Put a minimal amount of olive oil in a non-stick pan. (Remember oil expands as it heats so what looks like not much when you put it in a cold pan can easily turn into an unhealthy and unappetising oil slick in the finished dish.) Fry finely sliced onions until golden and naturally caramelised. Add some oats and continue frying while stirring for another couple of minutes. Then add vegetable stock, bring to the boil and simmer, continuing to stir. Add salt and pepper to taste – and there you go. It’s surprisingly sweet and smugly healthy.

Later, I spent several years working in a busy catering operation at a Highland tourist attraction. It was rewarding to impart my knowledge to a team mainly composed of young people and undergraduates on their summer vacations – training them in environmental health and seeing how they came to take it seriously, but also in simple cookery. It was good to be able to get them to realise they’re going to be feeding themselves for the rest of their lives and that something they’d simply undertaken as a source of holiday cash might have a deeper and longer-term value for them.

But I also discovered how rewarding it was to learn from people much younger than myself. I learned a lot from answering the intelligent questions they’d fire at me. It was also great that they showed me things. They were indefatigably cheerful, even when things got stressful. They made me aware of the tendency that age stealthily brings (particularly to men!) to be short-tempered. They impressed me so much with their stoical ability to smile at endless lines of customers ordering fancy coffees. They seldom allowed themselves to get flustered (as I did on the odd occasions when I came out of the kitchen to help), and made each customer feel that their coffee was the most special they’d prepared that day.

I remember one particular occasion when I was explaining the intricacies of some complicated salad arrangement and suggested they might want to make some notes. One young chap simply pulled out his mobile and took a picture of the finished plate, dismissing my fuddy-duddy concerns with a conclusive click. It was like the famous Indiana Jones scene when Indy pulls out his gun and despatches the master swordsman. It simply hadn’t occurred to me to do such a thing, even though I was aware that phones had cameras. But I equated cameras with taking snapshots, not recording information. My young team were just as astonished at my technological limits as I’d been at their terror of preparing their own dinners!

So, cooking – like so much else – is a process of give and take. As the world changes faster with every passing year, some of us may despair of having anything of lasting value to pass on to our children and grandchildren. But eating well – and taking pleasure from the process – is something every age group can share, passing on knowledge and skills in a genuinely organic way.

If Alasdair’s writing has inspired you, why not try your hand at writing about how you eat well as part of our monthly CLANGERS project where Autumn Voices members share their own experiences. Read more about CLANGERS.