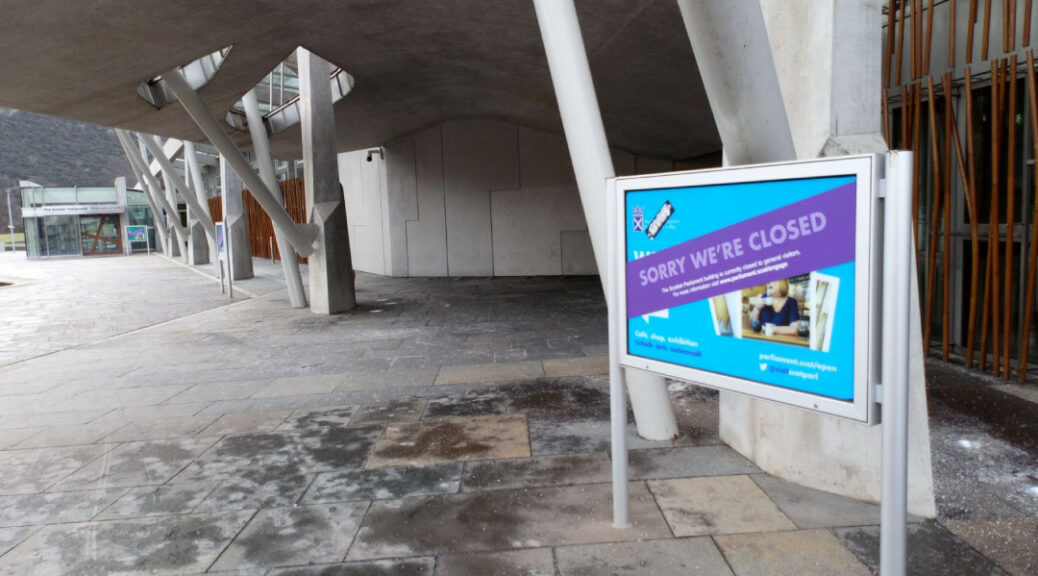 Ken Cockburn is a poet, translator, editor and writing tutor based in Edinburgh. After several years at the Scottish Poetry Library in Edinburgh, he has freelanced since 2004, working in schools, colleges, care and community settings, and collaborating with visual artists on book, exhibition and public art projects. He runs Edinburgh Poetry Tours – guided walks with readings of poems in the city’s Old Town. His most recent collection is Floating the Woods (Luath, 2018).

“a new season / delicate in its softness”
Naomi Shihab Nye, ‘All the Names We Will Not Know’

March shifts into April. The world is changing around you and you can’t help but notice. Leaves fill in the gaps between branches, light lingers into the evening and plants sprout everywhere, especially, it seems, in the cracks between pavement and wall. Spring yellows brighten our surroundings, defiant against the faded colours of discarded plastic. We may be more aware of the negative effects of waste and pollution, but it doesn’t mean there’s any less of it; if anything, in the ten years since you had to start paying for plastic bags and they became less visible, the overall amount of plastic washed up on our beaches has increased.

I notice I can go off at tangents.

I have lived in Edinburgh for thirty years – the last five at Newhaven down by the sea – but I spent the first lockdown of 2020 at my partner’s new house in Stonehaven and missed spring opening up my garden (beds around a lumpy lawn furnished with clothes poles). There was a lot of weeding to do when I returned in July. This year I’m enjoying watching familiar plants emerge, bud, flower after the bareness of winter: the pink falling stars of erythronium, yellow forsythia, modest primrose, the rambling wild rose I broke into three and replanted beneath the wall, each new part now throwing out green leaves, next to the purply shoots of the cultivated roses, the fattening red stems of rhubarb, the green carpet of celandine leaves with a few yellow flowerheads rising … and a single snakeshead fritillary which has somehow seeded itself in the grass. I notice small red buds forming on the pruned apple trees at the front, willowherb reclaiming the cleared bed above the road, the reappearance of a green line where pavement meets wall. As the haiku poet Shadō once put it,

And another haiku, this one by Chigetsu:

Neighbours over the high wall must have a bird table as the songbirds congregate there, ignoring the fatball feeder I hung from one of the clothes-poles; I get pigeons, magpies, blackbirds. I notice an increase in birdsong in the park, spot the occasional goldfinch and coal tit among the sparrows, hear the crows make an odd percussive sound along with their usual caw-cawing, see the black-headed gulls get their black heads back after winter whiteness, notice that some of the herring gulls retain their juvenile plumage while others are stuck awkwardly between mottled youth and the clean greys and whites of adulthood.

During the lockdowns our horizons have been limited. In Edinburgh I try to vary my outings, but recently I’ve found one particular route recurring; along the cobbled street, up the wide road with high walls either side, along residential streets with burgeoning front gardens, into the park with its formally planted, sheltered upper part, and its open lower part sloping down almost to the sea (on either side the grass hasn’t quite recovered from the February sledging), along the main road past a breakwater where gulls and turnstones gather in bad weather, to the harbour and back to the cobbles. I like the variety within that small compass.

Beyond my immediate surroundings I’ve also walked in Holyrood Park, which can be busy but there’s plenty space, past the palace and parliament with their closed doors, and up the Canongate which is eerily quiet; in fact any time I’ve been in the city centre these past few months, it’s felt like a Sunday afternoon from the seventies – nothing open, few folk about, nothing to encourage you to stay.

I’ve also walked on the beach at Portobello with my daughter who lives nearby, slightly spooked by being among crowds on days when it’s sunny. But there’s something pleasing about being out for a walk with others who are just out for a walk. There are places selling tea and coffee, fish and chips, cakes and pastries, and plenty folk bring a carry-out and hang out with their pals as if they’re in the pub, but you’re still having to make your own entertainment by talking to each other, keeping the kids amused, throwing a ball for the dog, like we’re all figures in a contemporary version of a Brueghel painting.

Yesterday it was windy, with fewer people out; we found the shelter of a wooden groyne, and had crows for company, curious as to what we were having for lunch, just as we were curious about their curiosity. They were prepared to come very close, though they hopped in sideways, one eye on our lunchbox, so as not to have to turn if they did need to make a quick escape.

If it’s often a case of looking out and noticing what’s there, sometimes it’s interesting to notice what’s come into my mind. For some reason the other day I pictured the area outside Balham station; I’ve a friend who lives nearby, but it’s a while since I spoke to him, and much longer since I’ve been there, but up it popped, as if I’d a slide show set on Random Play.

They’re noisy, but I do like seagulls. I see them crossing the sky outside my window, perfectly engineered to do so. During the winter it was all herring gulls, but now the bigger black-backeds have reappeared, in motion more gliding than flapping, then settling on the chimneypots and finials and surveying their surroundings. Noticing what’s happening, missing nothing.

One thought on “N is for noticing”