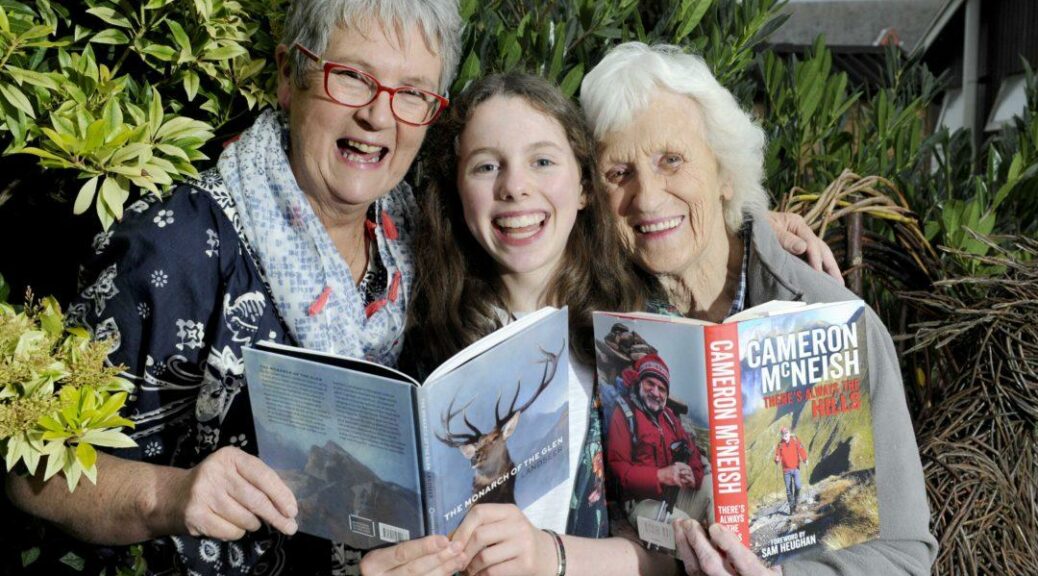 Life has changed immeasurably for many of us since the arrival of Covid. Not only have we had to properly examine how vital and indispensable our essential workers are, and finally understand who they are, but we’ve come to appreciate more than ever the role of unpaid labour and the things that don’t get done unless volunteers give up their time to make a difference.

This is particularly noticeable in small towns and rural communities that need to stretch their resources further, and for whom vital services, events and activities would not exist but for willing individuals who give up their time to organise, raise money and generally make things happen.

Wigtown – Scotland’s National Book Town in Dumfries and Galloway – is one such community, and Nanette Craig is one such individual.

Nanette is someone I know locally and have always thought of as a ‘super volunteer’. A Dumfries and Galloway lass born and bred, Nanette and her husband Billy have lived in Wigtownshire for decades. They ran a family farm until retirement and then moved to Wigtown itself 20 years ago and now can’t imagine being anywhere else in the world. As a farmer’s wife, Nanette rolled her sleeves up to work on the farm, raise her family and run the house. As we all know, this is more than three full time jobs rolled into one, yet she managed to find time to start the Wigtownshire branch of Save The Children and ran it as Chairman for 30 years.

Nanette was instrumental in getting the branch off the ground – recruiting volunteers, running fundraising stalls in the local market, and organising a multitude of bake sales, coffee mornings and other key fundraising and awareness activities. She reflects very fondly on this time, acknowledging the huge amount of work that went into producing things for people to buy (lots of cakes!) and noting how things have changed in terms of how we approach fundraising more as an online activity now (less cakes!). Although Nanette will happily admit that the online world of websites and digital community isn’t something she finds easy to connect with, she certainly doesn’t shy away from a challenge. In 2014, she decided to inspire people to dig deep by becoming an adrenalin junkie. For her 80th birthday, and to mark the 30th anniversary of Wigtownshire Save The Children, Nanette did a sponsored zipwire slide at Laggan Outdoors near Gatehouse of Fleet. The business is now closed, sadly, but once boasted the longest zipwire in Europe at 110 metres and saw Nanette strapped into her harness, hurtling down it at speeds of up to 50 mph, all for a good cause!

She raised £2000 at the time, and over £3000 in total for that one endeavour, along with many other amounts throughout her 30 years with Save The Children. These efforts were recognised the same year, and she was awarded the British Empire Medal in the Queen’s New Year Honours list for voluntary and charitable services in Wigtown and Newton Stewart. Billy likes to tell people she’s a ‘BEM’ but Nanette deflects this attention and now says she wishes she’d zipped down the wire a second time so she could enjoy the rush properly!

Her fundraising and volunteer efforts did not stop there, however. While Nanette gave up her time to work for the campaign to protect and support children in a global community, she also looked closer to home to support Wigtown itself. When she settled in Wigtown in 2001, the town had just been awarded official Book Town status after winning a national competition to kickstart economic regeneration. Nanette has been with it since the beginning and watched it grow, as well as helping it along the way by becoming a valued volunteer for the Wigtown Festival Company.

It’s fair to say this has been a real labour of love for Nanette. Giving back to her community has barely registered with her as ‘work’ as she recalls the genuine delight she got from seeing the festival come alive every year – watching the marquees go up, seeing the visitors arrive, hosting guests for an opening night fireworks party, guiding and encouraging new and younger volunteers and feeling the buzz around town as authors and celebrities became part of the local community for a few days. She absolutely loved meeting people and got a huge kick out of putting her branded fleece on every year and going to the venues to take people’s tickets and watch all the seats fill up. You can see her talk about the experience of volunteering and what it means to her to give back right here:

She not only did that every year, well into her 80s, but helped run stalls at The Kist – the local arts, crafts, food and drink exhibition that runs throughout the festival and at other times of year in Wigtown. Not to rest on her laurels, Nanette also became notable for baking shortbread for every newly arriving guest–host of The Open Book, the Airbnb bookshop run by the Wigtown Festival Company, now famous around the world. Nanette’s shortbread has made it into the eager hands of artists, musicians, writers, journalists reviewing the experience for New York and London publications, and visitors from as far afield as Russia, Australia, New Zealand, India and Taiwan.

They say it takes a village to raise a child; it takes a community of volunteers to make a festival.

Covid has changed all of this for Nanette. The lack of physical and community events has kept her at home, and she concedes reluctantly that it might be time for more of a rest, which I must chuckle at, as Nanette is almost twice my age and has more pep in her step than I do!

Community resilience teams replaced normal community life in Wigtown, as it did elsewhere, but although Nanette had to stay at home and give up her volunteering, she still somehow managed to do her bit to give back by not taking. I asked her if she got support from our local team, and she said she and Billy have family here in the town and couldn’t imagine using what they didn’t need. As someone who has often provided them, she understands all too well that resources are precious and need to be used wisely and spared wherever possible.

Nanette appears to me to be more thankful for all the contributions of others over the years than she is aware of her own. She is a hugely loved and respected member of the Wigtown community, but she is also a brilliant example of inspiring and creative ageing, and a very good reminder that giving back and giving to others means we give something to ourselves, too.

“Giving back” is the topic of this months CLANGERS – if reading about Nanette has inspired you to write about how you’ve given back in your life, we’d love to hear from you. Submissions are open throughout May.

7 thoughts on “Not Giving Up Giving Back”