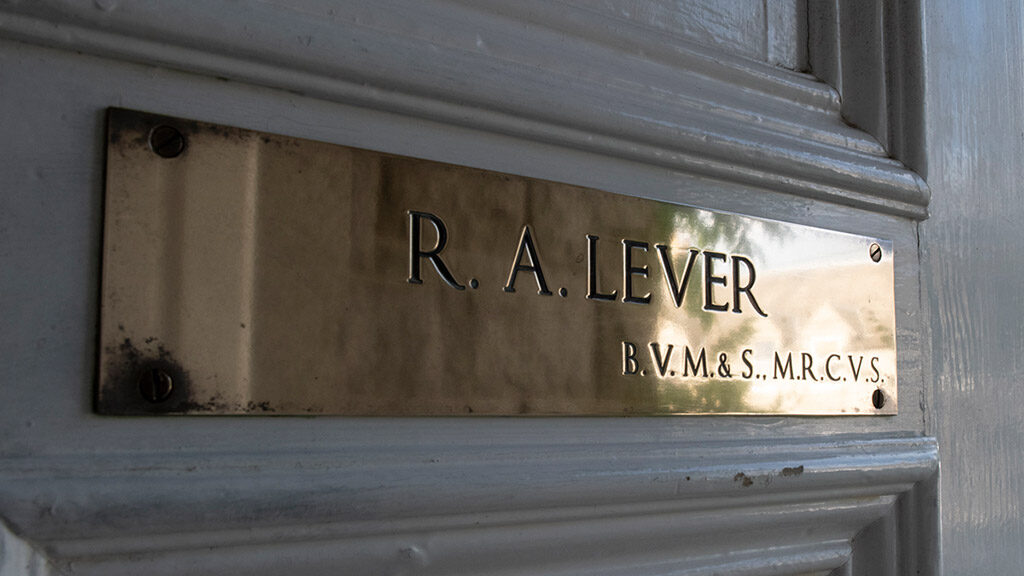 Dalbeattie is a small town, and at the time of our boisterous arrival, most of its residents were very much home grown. Everybody seemed to be somebody’s cousin (even if, once removed)! The tale of the naughty boys, therefore spread like wildfire and seemed to infiltrate each and every one of my early veterinary consultations. Before any symptoms were discussed, before any examination took place, there would be the inevitable enquiry.

‘And just what are they wee laddies of yours getting up to today Mr Lever?’

‘Hopefully, not trying to dowse half the town from their bedroom,’ became my standard reply!

I fully appreciate that my rocky introduction to single-handed practice in this town would have been so much easier to navigate if only the dreaded iPads and accompanying YouTube had been invented at the time. I do remember relaxing a little though when it was time for children’s television at about 4.30pm every weekday afternoon. The boys did enjoy programmes such as Blue Peter, The Magic Roundabout and The Wombles. Others, however, such as Postman Pat had to be carefully supervised after we overheard Andrew employing considerable patience and concentration while teaching his younger brother an alternative rendition of the Postman Pat song!

They would think it was hilarious if they were caught, rolling around on the floor in helpless giggles while Nanny Heather would strut about tutting away to herself and muttering ‘I just don’t know what is going to become of those boys of yours Roger.’

Somehow, they were always my boys when they were in trouble!

Judy could often be found tucked away into the corner of the sofa feeding baby Victoria while trying very hard not to chuckle or display any hint of amusement at yet another round of ‘naughty boy’s antics.’

I lived in almost constant dread of the unexpected (out of surgery hours) ringing of our doorbell. And indeed, there did follow two further significant dents in my efforts to build up a respectable reputation in the eyes of the Dalbeattie townfolk. One of those involved the ladies who ran the Bargain shop, across the road, and the second involved the family butchers’ shop which had the misfortune of being situated right next door.

But more of those scenarios later . . .

After the Christmas break, Nanny Heather decided that it was time for her to head west and catch the Stranraer ferry back to her home in the quiet village of Helens Bay, near Belfast. Time, therefore, for us to try and stand on our own feet and grab our new life by the horns.

The unpredictability of how each day would develop was daunting considering our damp cramped fish smelling dwelling was home to Judy and I, an eight-week-old baby who wasn’t fond of sleeping, a four-year-old and a two-year-old who insisted on breaking every rule in the ‘acceptable child behaviour’ book and two Collie dogs. The ‘front room’ which was my surgery, had only a thinnish door separating it from the escalating mayhem which was frequently kicking off on the other side in our 12-foot-square ‘family space’.

Small animal consulting with my significant genetic hearing deficit was often a total nightmare against the backdrop of the baby crying, dogs barking, boys squabbling and Judy’s occasionally uncensored yelling at them all to just ‘*#*$ *#*’!

It usually took my sudden and unannounced barging through from the surgery to draw a halt to the pandemonium. Peace would immediately descend but usually only long enough for me to finish the consultation. I really have no idea just how I managed to build up a list of loyal clients against this backdrop. Perhaps we provided some sort of entertainment value or perhaps it was just the unfailing decency of the townfolk, who time after time gave me the chance to prove myself as a reliable vet.

Against this already chaotic backdrop, I ask myself ‘just what on earth possessed me to bring home an orphaned new born lamb’? Larry was just a little guy that I could not leave behind. His mother had sadly died and the farmer who was already struggling with too many other orphaned babies made it clear that he had no intention taking him on. Larry was just one too many.

‘You take him home with you laddie, your weans will love having a wee lamb to look after.’

Well, to be fair, the ‘weans’ did absolutely adore Larry, but how much ‘looking after‘ they did was debateable. I can still hear poor Judy’s exasperated protestations of ‘don’t you think I have enough on my plate here without a blooming lamb to feed?’

She was right of course. After Nanny had retreated back to Ireland, Judy spent each and every day chasing her tail, trying to keep the boys occupied, answering the surgery, dealing with clients while I was AWOL on some large animal visit. We had no mobile phones then so keeping track of my movements was particularly difficult.

She just didn’t need the addition of Larry the lamb but despite herself it was only days before she too was besotted. At the first little bleat, baby Victoria was plonked in her pram, often mid feed, while Judy made up Larry’s bottle and fed him. But for all her devoted attention, it soon became clear that Larry only had eyes for me!

I had constructed quite a sizeable pen for Larry just opposite the back door and also managed to fence in a small section of the grassy part of the yard (it couldn’t really be called a garden). So, each afternoon, Larry was able to have a wee gambol about on the sunny days of the new spring.

I was very proud of my ‘pen construction’ but I should have been a little less open and honest with the home educating opportunity for the boys. I should have known better than to teach them how to work the ingenious little lock which I devised to keep Larry safely contained when necessary and prevent him trotting out into the back lane and possibly taking a right hand turn down to the High Street!

Larry fortunately did not escape to become a traffic hazard in the High Street, but he did manage to disgrace me just once.

I was working my way through a Saturday morning surgery with relative confidence as Judy had taken Victoria out in her big high pram with the boys for a scamper around in the park.

I had nipped through the family space and on into the tiny kitchen to make myself a quick coffee between consultations.

To my peril, I did not notice that the back door was slightly ajar . . .

Back in my surgery, I welcomed in the last client with his somewhat excitable Yorkshire Terrier who had been booked in to get his yearly booster vaccinations.

Syringe at the ready, there was a sudden, loud crashing noise and thundering of cloven hooves. I almost vaccinated the human client as I was knocked off my feet by a bleating overgrown hulk of a lamb who rammed into the back of my legs. Larry had escaped! I suspect the boys had paid him a visit before their trip to the park and had forgotten to lock the pen. The startled client (who was a gentleman of advanced years) turned worryingly pale as he tried to restrain his little Yorkie which was becoming more manic by the second as Larry continued to bleat and jump about looking for his adoptive ‘mother’ to feed him.

I realised in those frantic few minutes just how much Larry had grown; he was a big lad and he was causing absolute havoc in my surgery. Amid a flurry of uncoordinated apologies and attempts at reassurance I managed to arm wrestle Larry to the floor, calm him down and gently lead him by his woolly scruff back out of the surgery, through the family space, the kitchen and back into the security of his pen.

Door securely locked, I hastened back into the surgery to find that my client had gone. I couldn’t really blame him so I wrote a very contrite letter of apology.

I thought I would just have to accept that I was going to win some and lose some.

I was extremely embarrassed by it all and inevitably a little saddened as I had to face the fact that it was probably time for some tough love thinking. Larry had grown into a big boy lamb and the time had come for him to be weaned away from me as his substitute mother.  He needed to know he was a lamb and join in with some other lambs so he too could dash about and spring and hop around on some grassy hillocks.

Also, I couldn’t risk any more bleating, cloven-hoofed intrusions into my consulting room. The boys were distraught at the thought of Larry leaving but Judy did breathe a wee sigh of relief. I was fortunate in that a good friend who had a smallholding just outside Dumfries agreed to Larry joining his small band of hillock gamblers. Larry never looked back and it was wonderful for our wee boys to see him run away with the others, just being a lamb and relishing his freedom.

Two weeks after Larry had been relocated, the dear gentleman of advanced years reappeared back into Saturday morning surgery with his rather worried looking little Yorkie held securely in his arms. ‘Benji is here for that jag Roger, if you can assure me that yon blooming big sheep is safely secured. It took the wee man almost a week to recover, and myself about the same.’

I was able to assure him that Larry was now freelancing in a big field outside Dumfries. He looked relieved and slowly unravelled little Benji from his arms and settled him down on the consultation table. Benji, however, kept his beady little eyes firmly fixed on the door into the family space . . . He wasn’t taking any chances!

Apparently, once my client had recovered from the shock of Larry’s unannounced visit, he had seen the funny side of it all, and the story was told many times down in the pub.

Ah – the unfailing decency of the town folk. They had given me that chance once again and as the ale flowed down in the pub, I guess various enquiries of ‘what’s that young vet been up to now?’ were proferred in amusement and anticipation.

I suppose it was a change from ‘what have his naughty boys been up to?’

Well . . . as I promised, there will be more of those scenarios later!

7 thoughts on “High Street Vet – and the naughty lamb”