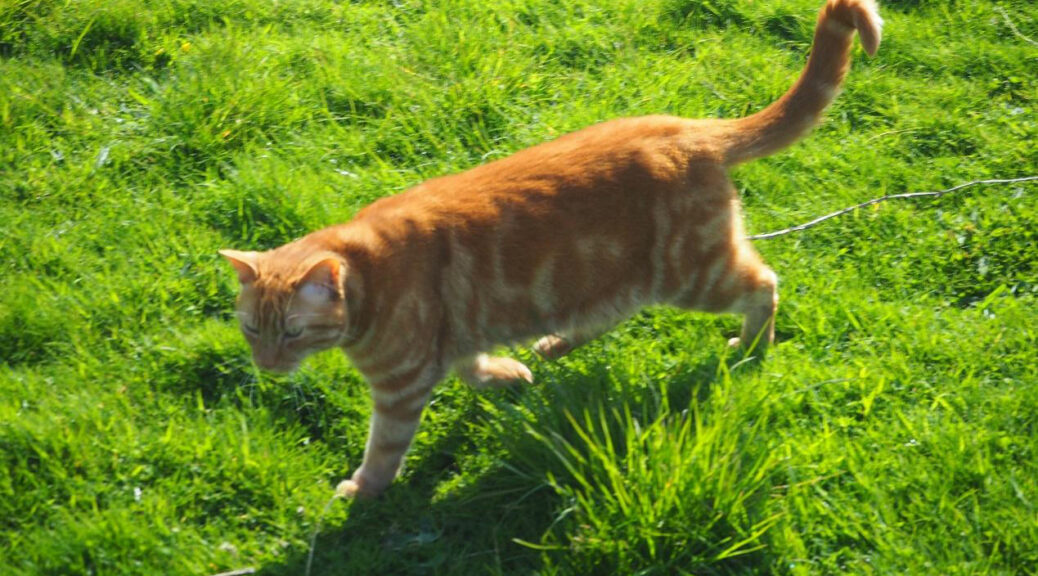 Flora Fleming has worked with the Ayrshire branch of the Cat Action Trust for years, and first introduced Orlando to Sallie and Robin.

Flora here. I don’t think you remember when you and I first met, so I’ll give you a few clues: lots and lots of cats and kittens, almost every one a gorgeous redhead, living on a farm where they just weren’t being looked after very well at all. You were one of the little ones Orlando, and I caught you in a trap so the cat doctor could have a look at you and make sure you were okay. Before I go any further, I hope you understand now that you’re a big boy why I had to catch you in a trap. You weren’t used to people touching you so you wouldn’t have just let me pick you up. I know that was scary and confusing for you Orlando and hope you’ve forgiven me. Some of your wee family and friends weren’t looking so good, but you were almost perfect, if a bit on the hungry side. Did you catch what I just wrote? Did you see the words ‘almost perfect’? Of course, you aren’t almost perfect now, handsome boy, you are COMPLETELY PERFECT! But you don’t need me to tell you that as I know your human family have made that clear to you over and over again.

Well, Orlando, I must tell you about another boy who was caught in one of my traps! He really wasn’t well at all and needed to see a cat doctor very quickly. He isn’t as handsome as you are, of course, but sometimes the not-so-gorgeous cats need help too. He couldn’t tell me what his name was, so I had to make one up. I’ve named him Colin. Do you like it? Anyway, poor Colin had a really sore ear with all sorts of things going on inside and needed to have lots of antibiotics (medicine for people and cats and other animals – even dogs!) before he could have an operation on that sore ear. After a short while Colin let me know that he wasn’t all that shy at all, he’d just had a hard life, and soon he was just loving being fussed. What he loves most, though, is having a nice warm place to live and lots and lots of food. Honestly, there’s no filling this wee guy! I wonder if you can guess what Colin’s favourite treats are? If I tell you that they’re your favourite too you’ll know exactly what I’m hinting at! Colin has to have another, much bigger, operation on his ear Orlando but I’ve told him all about you and how brave you were when you had an accident a few years ago and I think that’s made him want to be (almost) as brave as you are. Would it be okay if I write to you again and let you know how Colin’s doing? He said he’d write himself, but you know what it’s like when you don’t have opposable thumbs. He says God slipped up there and must have been having an off day when that decision was made, but he’s really glad that God eventually got round to inventing Dreamies.

Lots of love from Colin and Flora