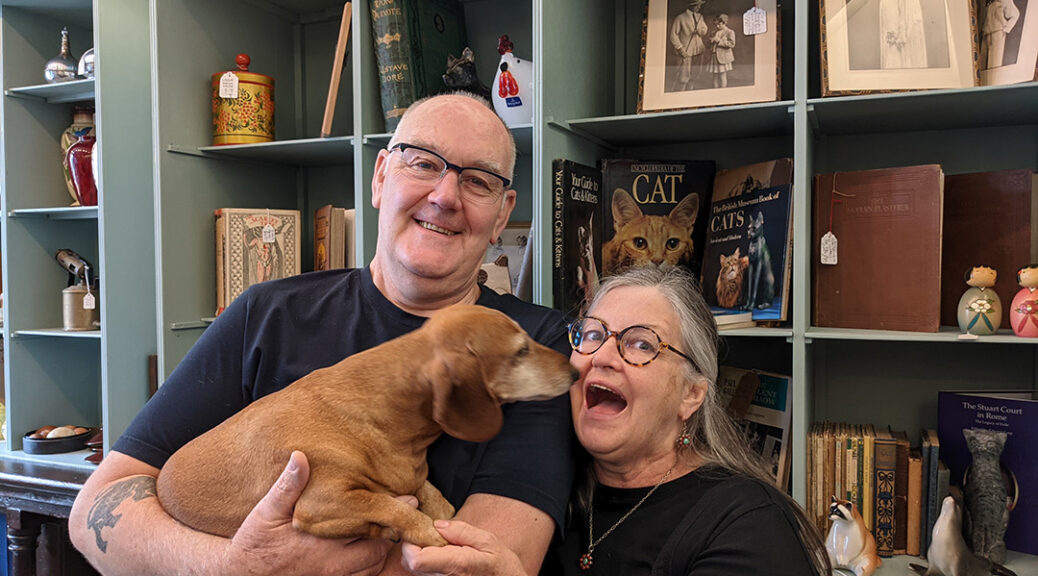 Want to tell Orlando about your pet stories?
Why not send your anecdotes and pictures to:
orlando@autumnvoices.co.uk

I’ve always adored animals and have had lots of pets over the years. When I reached my fifties, however, I found myself living in Ross and Cromarty, sharing a house (and running a business) with a dear friend, and thoroughly pet-less. It was a strange experience. I was happy and busy and working and socialising, but I was single; a woman of a ‘certain age’. I had children and grandchildren and I’d travelled and lived in lots of places, but I was entering a period of my life where people generally, and women more specifically, start to become less visible and valued in society. I’d always loved pets for themselves, but I became very aware that they are more than wonderful creatures and loving companions; pets can be a way of getting out of the house and exercising and chatting to other people. Dogs are especially brilliant for that. Some people might understandably see a dog as too large a responsibility. For me, a dog signified leaving the house safely and confidently, and stepping into the world with a ready-made friend in tow rather than feeling like a self-conscious middle-aged woman, which I very much did.

I didn’t stay single. I met my lovely John, and we eventually moved to the south of France together and set up a business. After caring for younger children and grandchildren and working for other people, we were a little bit free! We had fewer responsibilities and could go wherever we liked, but we also loved furry creatures and started to acquire some cats – all of them French!

Bramble, our first of the three, moved in with us after arriving on our doorstep one evening. He was wet through and stood his ground until we let him in. We dried him off and gave him food and he made himself thoroughly at home, where he proceeded to guard his perimeters like an obnoxious old colonel and hiss and spit at anything that crossed his path. He hated everyone, except John. He was especially put out when Peaches, our second cat, arrived. She came to us via local people who bred Siamese kittens every year. After a bit of pleading from visiting grandchildren, we relented and picked one from a new litter. She was a peach-white Siamese tabby – hence the name – and she was gentle and docile and adorable. Bramble absolutely hated her.

We randomly met an animal behaviourist and explained to her that one of our cats was vicious and grumpy and hated the other one. She declared herself to be a cat whisperer and asked us if we’d mind her having a ‘chat’ with Bramble to get to the bottom of things. It’s fair to say we were huge sceptics and thought it was all a bit of a hoot, but we showed her where Bramble was and left her to it. After a while, she reappeared, and I asked her if she’d had any success getting through to him.

‘Yes,’ she replied, ‘there are a couple of things he’s mentioned.’

‘Well,’ she said, ‘firstly he’d like an apology. Nobody consulted him before this new kitten arrived and he would like to have been asked first. He feels he has to spend time protecting her because she’s little and he rather begrudges the imposition on his time with no forethought to the impact on him, so he’d like you to acknowledge this and say sorry.’

‘Right,’ I replied, ‘I’m sure John and I can manage that. What’s the second thing?’

‘He doesn’t mind tuna,’ she went on, ‘but he’d quite like a bit of chicken every now and again.’

That was us told. Forelocks were clutched in front of Bramble while apologies were made, and he was given a bit of chicken. Miraculously, from that day forward Bramble changed and was a much more amenable and pleasant cat. Although he never got especially close to her, he became quite lovely to Peaches and the hostility totally disappeared. We were grateful for this ceasefire because we then welcomed a third cat (after running it past Bramble of course) into our home.

One day, John was doing building work on a house in town, and he found a dirty soaking wet rag of a kitten stuck in a gutter while up on the roof. He brought him home, still alive. The repulsive little bundle didn’t look likely to survive the night, but we filled a basin and shampooed him gently and rinsed and dried him off. The filthy scrap emerged as a beautiful long-haired Siamese. He couldn’t have been more than six weeks old, and we were sure he must have belonged to someone, and we put up posters to find out. Sure enough, we heard from someone who knew his origin that he came from a place up the hill where the animals weren’t well taken care of, so we decided to keep him.

We named him William Webster, after the dictionary, and because he’s a solitary discerning chap. He’s also a bit short-sighted, not very bright and ridiculously accident-prone. As well as various other scrapes, he’s face-planted off a wall and bashed some front teeth out and he disappeared shortly before we moved lock stock and barrel from the south of France to the south of Scotland and turned up four days before we were due to set off, having been attacked by dogs. We’d all but given up hope of finding him. He was bloodied, dazed and emaciated and had a huge injury on his shoulder and neck. We took him to the vet and got him patched up as best we could with a bright blue bandage over his fur coat. We set off with barely a moment to spare in our vehicles with the three cats and the dog each in their crates, miaowing and howling out of the back window – silently it would seem – at anyone following behind them.

You may have spotted I mentioned a dog . . . By that point we had acquired a marvellous little chap we adore. We loved our cats, but inevitably, we got a little bit older and a bit too comfortable and after a while I started to wish for an excuse to go outside – something to force us not be stodgy indoor people.

John had sworn we wouldn’t get a dog, but we missed our families and I started to talk about maybe getting one. John seemed resolute, but I started following an online thread by a local friend who ran a rescue place. It led me to a picture of a gorgeous dachshund who needed a home. Who can resist a dachshund?! The family who had him for a start, who were too busy and not impressed that he wasn’t the miniature version of the breed they expected. John too, initially, but his resolve crumbled, and I sent the friend a message asking about the little sausage, not expecting that a beautiful pedigree dog would still be available. To my utter astonishment he was, and he was only a few miles away in the next village, so we headed on over, just for a look.

We were kidding ourselves. We thought of names in the car on the way there, and of course we took him. He was a little bundle of chestnut-coloured gleaming satin gorgeousness! He ran over and leapt straight onto us and that was it – I had my cheque book out to pay for him. We took him home that day without any discussion of dog care: he was our accidental bargain dachshund!

We named him Wolfie. He’s a German breed, and we thought Wolfgang was quite fitting. John and I were also big fans of Citizen Smith, and we thought naming him after Wolfie Smith from the Tooting Popular Front both suited his personality and our leftie politics. Our darling boy was gorgeous and a right-on socialist. He was only a few months old when we got him in the spring of 2014, and he’ll be eight this autumn. Of course, we didn’t quite realise then just how clever, stubborn and difficult dachshunds are, and how tricky they can be to train. Especially house train! He can be an absolute tyrant, and detests going out in the rain, but he’s a sweet boy who loves a nuzzle and sleeps with us in our bed. That’s right, in the bed. We started off with him in a basket next to the bed, then he got onto the bed, then he got under the covers with us. If he gets too hot, he emerges from under the covers and arranges himself around John’s head, so John often wakes up to find himself wearing the dog.

He is, thankfully, fine with cats, but after all our drama with Webster it was a long trip back to Scotland. We did a cross-channel journey with our menagerie and arrived at what was supposed to be pet-friendly accommodation only to find out they had changed their policies and would not accept us. There were tears and tantrums and harsh words – mostly from me – but we managed to find sanctuary at a friend of John’s in Oxfordshire for the night before making our way further.

That was in 2018. Bramble died at the age of fourteen in 2019, then Peaches became ill and sadly had to be put down in 2020, but William Webster is about ten now. He’s a bit lazier than he used to be. He rather likes his food being brought to him and lurks under a bamboo patch in our garden trying unsuccessfully to catch sparrows. He and Wolfie are good pals in our new place, and we love that they’re here with us.

We’ve been entertained by walking Wolfie around the small town in which we live and meeting the locals, who all stop to admire him. We’ve had people arrive in our shop here with their own dachshunds and introduced Wolfie to them. I’ve even started collaborating with a local artists’ book publisher to put together an illustrated book series based on Wolfie. The first one will be called Wolfie Wants Wellies. With a cat called William Webster and a dog called Wolfie, the W-vibes are strong!

Our pets have helped us meet friends here, get settled into our new life and become part of the community. They have brought us new customers and given us creative inspiration, and they are the subject of much of our chatter and stories with both next-door neighbours and visiting tourists. We love their wisdom, loyalty, affection and comfort, and they love us, mostly unconditionally, and never judge us. Pets don’t care what you look like, or if you’ve put on weight – they just love you regardless in ways that humans struggle to manage. They may have their issues, but they don’t come with baggage, and they don’t carry prejudices like we do. Best of all, they’ll never tell anyone your secrets, they don’t mind if you fart in bed, and they never complain about your cooking . . . as long as you give them a bit of chicken every now and again.

Sara Baker (71) and John Black (66) run The Wigtown Emporium a vintage and retro curiosity shop in Scotland’s National Book Town. They have an ever-changing selection of stock, but always like to get their hands on animal-themed pieces.

One thought on “Webster and Wolfie in Wigtown”