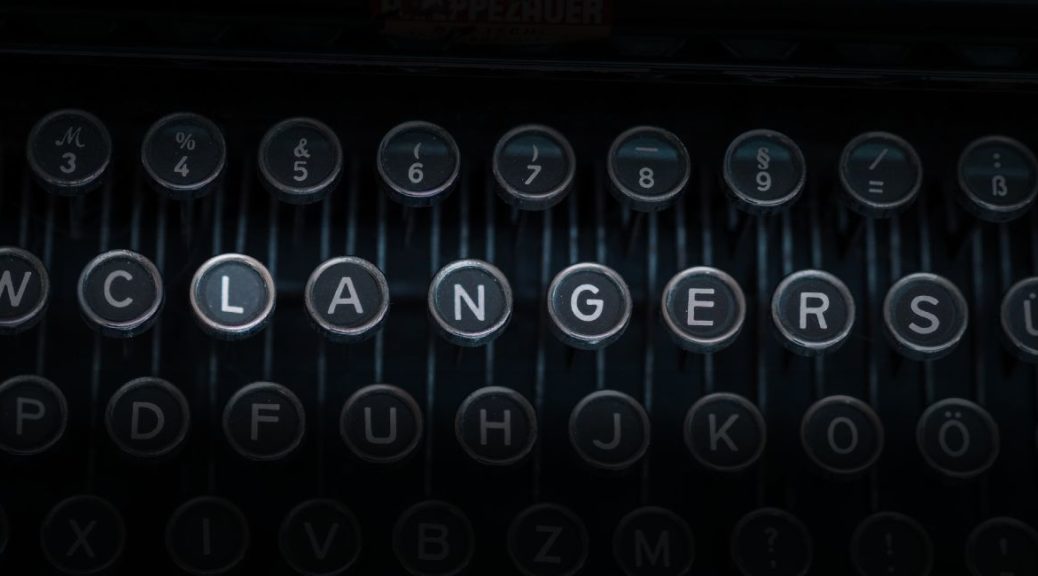 Thank you to all those who contributed February flash non-fiction pieces to our CLANGERS project. I certainly learned a lot from it – what learning means to different people, different ways of learning, how it’s inseparable from our wellbeing and how lockdown can both take away and add to our learning opportunities.

Learning in lockdown might involve Zoom meetings … but I tried that! The connection failed, my unique link didn’t work, the event happened without me. I learnt not to await technology, to learn. For health, learning is everywhere; it is the human condition. To face the unthinkable – and to find a way – that is learning. To face grim facts everyday – names and faces obituarised or vanished – learning is about the present moment. Living for that joy in moments is something that wellbeing courses might teach. There are plenty of freebies (or paid courses), to learn a new skill. I can cook already; have a pre-lockdown book of knitting, and crochet. Though I haven’t connected with ebooks through the library, that free connection to magazines and newspapers has proved invaluable. Learning – and knowing when to learn – is stressful, when the present moment matters more. Learning through FitBits or Garmin: those distances/stress/heartrates/calories burnt. All is learning. Watching the progress of spring: from winter aconites, through snowdrops, and hellebores, heralding crocuses, daffodils, hyacinths, and, oh, so much more. The garden is my first teacher; always. The moon/stars/and sky, second. And what’s your third?

When I was young, I always wanted to learn. As I grew up, I wasn’t particularly good with exams, and perhaps didn’t get the qualifications my studying deserved, however, I enjoyed the process of learning.

Throughout my thirty-year Police career, I continued to learn, and made an unwritten vow to learn something new every day. During this period, I ran marathons and cycled, and on one occasion, cycled across Europe to Romania. In preparation for this trip, I took courses in German, Hungarian and Romanian languages, in an attempt to aid communication. Throughout my career, I volunteered to study courses in the British Sign Language, public-speaking and counselling; again, aiding with communication. On a personal front, I’ve studied Genealogy, and a Mathematics ‘A’ Level course, in an attempt to better myself.

I finally retired from work last March, and returned to my hobby of oil painting, and taught myself how to paint portraits. And am forever trying to learn new techniques, hoping to improve my work. Now in my Autumn years, I still enjoy learning, and am trying to keep relatively fit, as I believe in the mantra – active body, active mind, and that you’re never too old to learn.

If all else fails – read the instructions. But what if the manual is missing from the box?

Having had an intensely competitive, dominating parent I only discovered in my early sixties that I am the product of a dysfunctional upbringing. I learned how persistent such emotional scarring can be.

Left to my own devices, life for me was pretending to be someone until it worked. Mostly, it didn’t. I crashed through life without even knowing guidance for dealing with relationships, employment and my various life choices was absent.

Learning that all else had indeed failed I took command of my own education. I spent what seemed like a small fortune on talking therapy and learned for myself what had to be done.

I learned that, in some cases, things are past now, and in the past they must remain. I learned to face an issue, to let go and move on. I’m repairing what I can and learned I have loyal friends still here with who have something in common. Either they’re all completely deluded or they’ve seen through the veneer. I’ve learned to love them better.

Learning, for me, is an incurable itch requiring constant scratching and so use of those words – What, When, Which, Who, Why remains constant.

The only other modern languages with which I am familiar are Latin based, (as is to some extent English), and they do indeed incorporate similar words but in which the WH is replaced with QU, as in qui or quoi or quand, for example. But what about less well known and older languages such as Basque or Finnish? Surely the urge to Learn must be universal. Were it not, knowledge in those languages would have remained in its original primitive state. One might imagine therefore that, even prior to the development of language, a ‘speaker’ might express his/her need for information by making an ascending scale sound with a lift of his/her eyebrows? Speculation!

In the present situation of lockdown all youngsters are in need of help to acquire information in its most informal context to supplement such formal education as may be available; a situation in which grandparents can be more able to help than parents, so please don’t discourage the use of their WH questions, but instead try to respond with another WH question such as ‘Why do you ask that?’ and turn the original question into a discussion.
You might be kept busy!

I studied learning – the ways and means, the methods and styles; it was my job. Now, instead, I watch Daniel trot up and down, a plastic brick in each hand. He can’t quite fit them together yet, but he knows it’s important to keep trotting and trying, trotting and trying, serious faced, singing to himself in words only he knows the meaning of. Sometimes he trips over a discarded toy because he is looking ahead, not at the floor, and he picks himself up each time, undaunted. I watch him, mostly without saying anything, marveling at his busy intention. I watch him learning, and eventually I spot the signs that he is beginning to get tired. He rubs his ear, he walks in circles, losing purpose. He staggers and trips, and this time he cries instead of getting up and carrying on. It’s time for a cuddle, a song and a sleep. Learning by doing. We learn together, Daniel and I, how to build the friendship that will be special to us for all our lives.

‘You’re never too old to learn’

The beautifully hand-written note was shyly pushed into my hand. The writer? My friend, Cheng Kong, doctor of traditional Chinese medicine and bagua Master. As well as the acupuncture treatment for my migraines he had suggested taiji. Being nearer sixty than fifty I thought I was maybe too old to learn a new physical activity. Then I remembered I had been in my thirties when started judo and managed a couple of medals and a green belt. So, I began with 32 form switching to 24 after moving to a different area. I subsequently acquired a car so was able to travel to classes and workshops, adding 32 and 42 Sword forms, Broadsword and my favourite, Kung Fu Fan. The weekend sessions were usually taken by visiting Chinese masters. I particularly enjoyed learning various forms of Qigong. This resulted in a trip to China arranged by Chinse contacts. I was able to meet up with Dr Kong again, something we thought would never happen.

Physical ‘problems’ have meant all the jumping and kicking has ceased but there is so much that can be employed for overall well-being, especially in the present climate. Remember: ‘You‘re never too old to learn.’

I intended to start this piece looking at how I connect, by writing I like to write poetry. But the truth is, that during these months, nearly a year now, of lockdowns and restrictions … I’ve scarcely been writing at all! And I’ve been berating myself big time for what seems like laziness, lack of spine … you name it. All the usual mean comments coming from my ever-imaginative inner critic.

So, when I heard the poet John Glenday saying in an interview that he was exactly the same, not a finished poem at all during this last year … but … and here’s where I’d have leapt up and possibly tried to hug him, but the interview was on Zoom (!) … he said ‘I keep a journal, I write down observations, fragments, which may become poems’. And I thought ‘But so do I!’ Not every day, but a lot of days. I go out for a walk and write down what I’ve noticed; I meditate and write down what comes up; if I find myself crying, I write down what I’m crying about; ditto for laughing, or indeed any other feeling state I find myself in. That’s how I connect …

(Editor’s note: Through no fault on Sheila’s part, her January contribution didn’t reach us until late February. Since connecting and learning are so entwined, we decided to include it here.)

I watch television purely for entertainment, but it’s a great teacher, a window onto the world, onto other communities and societies and other people’s lives.

To be a writer is to be a lifelong learner. An historical novel, about the 19th century war of liberation in South America against Spanish rule has considerably extended my knowledge of that episode of history. There’s always more to learn about words themselves – their sound, weight, colour and finer meanings.

Trying to keep up with modern technology (often failing) is a challenge. The modern world changes so fast. It’s easy to get left behind.

I have, at last, mastered internet banking, learned more about Facebook and what my smartphone can do (it’s definitely smarter than me!) and begun using Zoom and the self-checkout at Tesco.

Autumn Voices has been a steep learning curve with a lot of practical management things to consider, which also help to keep my mind and brain active. At my age I’m forgetting things almost as fast as I’m learning other things. But age does bring greater self-acceptance and greater self-knowledge.

One thought on “CLANGERS – Learn”