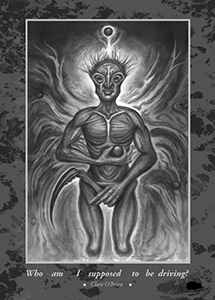 On August 9th, Wester Ross based writer Clare O’Brien publishes her first short collection of poetry, Who Am I Supposed To Be Driving? via Hedgehog Poetry Press.

Written in tribute to the iconic star who would have been 75 this year, and named after a line in an outtake from his 1996  album 1.Outside, ‘Who Am I Supposed To Be Driving?’ is a collection of ekphrastic poems written in response to thirteen of David Bowie’s albums, from 1969’s Space Oddity to 2016’s Blackstar.

The ultimate changeling, Bowie wrote songs that led us into landscapes as various and exotic as the characters he created to sing them.

The book’s preface reads: “These poems aren’t a critique. They’re not a biography. They’re not an attempt to paraphrase or explain the music which inspired them. Instead, they’re an exploration of the emotions the work creates, and the lost  worlds from which these iconic albums first emerged. Or perhaps they’re just the abstract thoughts of a flight controller,  working the night shift, wishing Major Tom would return.”

Clare O’Brien adds: “I first encountered  David Bowie at age 14 and like many of my  generation, I was changed by him. I also grew up just down the road from where he did in south London, so I understand something of where he came from and how that place and time continued to affect him as he spread his net around the  world. I wrote the poems quite quickly; soaking myself in the music’s imagery and sonics. I tried not to overthink it, though, and some of what I wrote surprised me.”

The eye-catching cover design was created by Clare’s son, Edinburgh-based illustrator  Ruairdhri Wright. Ruairdhri grew up in Inverasdale and attended Gairloch High School and Gray’s School of Art in Aberdeen.

“Fizzes like a fuse connecting the classical world to the transient world of fame and  celebrity. ‘Who Am I Supposed To Be Driving?’ is an intriguing and starkly beautiful tribute  to the music of David Bowie … a poignant reminder of the power of music to inspire us, to  move us, but also of its capacity to shape the darker corners of our minds.”

“Captures the essence of Bowie … weaves worlds within us, reminding us not only of what  we have lost but of what still remains. A stunning tribute to a mighty talent.”

Where to buy it

‘Who Am I Supposed To Be Driving?” is published on August 9th but is available now for pre order from for £7.99 plus shipping. A limited number of copies signed by the author are available from her website. Unsigned physical copies (and digital pdfs) are also available from Hedgehog Poetry Press, Amazon and other outlets.

Clare has worked as a schoolteacher, a journalist, PR to a Scottish politician and PA to an American rock star. Originally a Londoner, she’s spent the last 23 years living beside a sea-loch in Scotland, which suits her much better.

Her poetry and other work has appeared in anthologies including Heather: an anthology of Scottish writing and art (Alice Louise Lannon, 2022), Poems From The Heron Clan IX (Katharine James Books, 2022), The Sea Is Here (Unimpatient, 2020), The Anthology Of Contemporary Gothic Verse (Emma Press, 2019), Songs To Learn And Sing (Hedgehog Poetry Press, 2018), The Powers Of Nature (White Craw Publishing 2017) and in journals such as Mslexia, Popshot, The Mechanics’ Institute Review, Northwords Now, Lunate, and The Ekphrastic Review.

She’s also working on an experimental novel entitled Light Switch and a full poetry  collection, Huginn & Muninn, named after Odin’s ravens. Her work is most often described  as speculative, folk horror, neo-noir or modern gothic, but her main interest is the natural  world and the creatures, real and imagined, which wander through it.