In 2020 he was Jynt Rinner-up in the Poesie Section o Sangschaw 2020 and had several ither poems highly commendit. In 2021 his translation o Sappho’s ‘Ode tae Aphrodite’ was highly commendit by Sangschaw. These and ithers hae been published in Lallans,The Journal o Scots Airts an Letters. He is workin tae reclaim his Scots language ruits.

He’s had ither poems publisht in Poetry Wales, Magma and Searchlight. In 2020 he was yin o six winners o the Federation of Writers (Scotland) 20 Words for 2020 competition.

I wouldnae pit a number on it.

Robert Paterson (1716-1801) – Walter Scott’s ‘Old Mortality’. No strictly an active character, but the putative source o the stories in the novel o the same name. In the 18th Century, he traivelled Lawland Scotland kervin inscriptions on the unmarkit graves o Covenanters. A man efter my ain hert, in my favourite Scott novel.

It would hae tae be my laptap. Sae mony memories and picturs saved on it.

Fae the age o 12 tae about 16, I attendit meetins o Jehovah’s Witnesses, selt their buiks and magazines roun the doors, wi accompanyin presentations, and gied talks on Biblical subjects at their meetins. This was a uisefu pairt o my education. 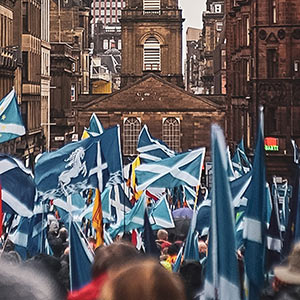