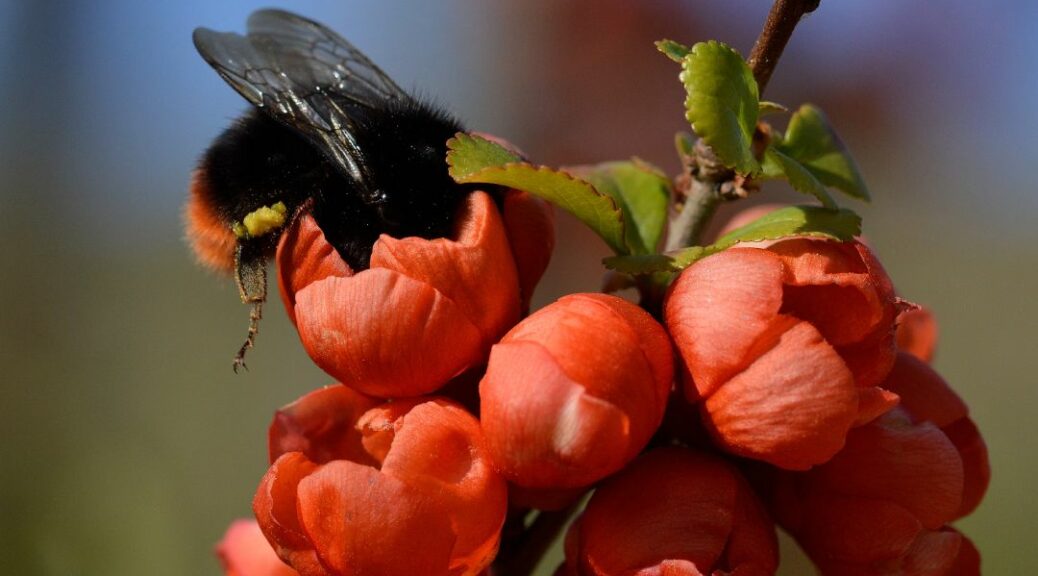 If I offered you a slice of bread smeared with goo which had been regurgitated by insects, would you accept? Does bread and honey sound more appealing?

I’ve been reading about cleptoparasites, inquilines and parasitoids: exploiters of bees. Technical vocabulary can be as off-putting as explicit descriptions of food production. Put simply, in the complex lives of our British bees, there is infinitely more theft, deceit and murder than in all of Agatha Christie’s novels. I have no skill in identifying the 270 species of bees which occur in Britain and Ireland, but I find their behaviour intriguing. On Saturday, I watched mining bees skimming above their burrows on a dusty path patrolled by their cleptoparasites: black-and-yellow nomad bees. A female nomad invades a miner’s tunnel, lays an egg in the wall of an unsealed nest cell, then scarpers. When her grub hatches, it kills the host’s egg, or larva, and usurps its food supply.

In our garden, bumblebees are zipping in sip-and-go mode from one pink Flowering Currant cluster to another. Japonica is a favourite of the Red-tailed Bumblebee which buries its face and guzzles, fluffy bum and pollen-caked legs protruding from the scarlet cup.

My raised awareness of bees began on a coastal walk a few weeks ago. Willows, side-lit by the fierce, low sun, had golden halos. The halos were catkins, no longer the sleek, silver pellets of early spring, but open, ripe flowers, each anther tipped with a pollen clump, yellow as the best sort of egg yolk. Even before I had discarded my woolly hat, bumblebees began to zoom in, clambering over catkins and the image stuck with me:

For over a year, I’ve written a wildlife essay each week and since October, posted them at mearnswildlife.wordpress.com. Sharing what I’ve seen has encouraged me to look more carefully, but so does any kind of writing.

Back in the 60s, when I was a budding naturalist, ALWAYS CARRY A NOTEBOOK AND PENCIL was the advice – nay, the command.  Now, many enthusiasts prefer to take photos or immediately use an app, but I still carry paper and pencil so that I can describe anything hard-to-identify and look it up later. I may take photos as well, but the process of looking at, let’s say a bumblebee, so as to describe the width and colour of its stripes, its size, its behaviour, forces me to focus on each detail and helps me remember.

Each January, I start a new wildlife diary, entering dates, places, observations, often just lists of species seen, with numbers and interesting behaviour. Writing up makes me aware of what I didn’t notice. When my husband and I have been out together, the scribe usually has to ask questions. ‘How many Orange-tip butterflies did we see?  Were they all male?’ Knowing that we will make notes later, knowing that these notes will be the basis of records submitted to bird reports or moth, butterfly or dragonfly recorders, encourages us to be alert, and often, to jot numbers down in that little notebook as we go along.

That takes me to another kind of writing: submitting records. Various websites make it easy for anyone to take part. At Nature’s Calendar you can record an annual event, such as your first Swallow, or Bluebell, or Red-tailed Bumblebee, or follow a favourite tree from bud burst through to leaf-fall. In Dr Phil Hammond’s CLANGERS, N is for notice and G is for Give back. Keeping and submitting records is a good way to give back to nature.

Scientific data and poetry may seem to have little in common, but both require a pruning of verbiage, a honing down to essentials. Both demand observation and its careful organisation. The best poems can give us a fresh insight, a new way of looking at something familiar. Reliable wildlife data points up trends which we would otherwise have missed.

The conservation world is realising how much we need both. Scientific data gives us a sound foundation for research, policies and management, but poetry can touch our hearts, even inspire us to live differently.

To submit once-a-year dates of first Swift, first Speckled Wood butterfly, first Cocksfoot grass in flower etc. or to follow a tree through the year – https://naturescalendar.woodlandtrust.org.uk/

To record your garden birds regularly:

How to take part | BTO – British Trust for Ornithology